How to process black walnuts

So, black walnuts, hey, that’s a Minwax stain, right?  No, though your hands may look like you’ve been playing with said stain after you’re done!  Black walnut is a type of tree that produces a hard nut with a meat inside.  The nut itself comes in several parts, the soft, green, outter layer, within which the kernal or stone lies.  In the stone lies the nut meat.  Many folks love black walnuts because they have a strong, smoky flavor, but honestly I’ve never tasted them.  Das husband was gifted a bag last year, and ate some, loving them, then lost the bag…sigh.  Anyway, I simply wish to be more of a localavore, and how better can I do that than foraging my neighborhood!

History:  Black walnuts used to be used for making ink and dyeing clothing.  They WILL stain anything they touch, so be ware!!!  Another use was worming.  It’s a very useful tree/nut.  But, back to the staining, here’s what it looks like on your hands: 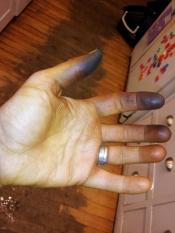 These trees are greatly valued for their wood, and the nuts too are either beloved or hated.  Beloved, for the meat, hated, because they make a mess on the ground under the tree and for the work involved in getting at the meat!  The trees nut fruitfully (hah, a pun!) every two years. They can fruit every year if they are old enough, but most are on a two year cycle.

I’ve been being given the nuts and have been picking them up out of the driveway of a rental property we own.  If the nuts are ripe enough, they’ll crack their green shell when they fall.  If they’re not ripe enough, you’ll need some help in cracking the green shell.

Here’s what you do:

Ripe enough- get a hammer and gently pound around the stone of the nut to get it out of the green shell the grey squirrels love.  My 8 year old daughter is the admitted master of this; she can do them twice as fast as I can.

Not ripe enough – boil a pot of water and boil the nuts for 3-5 minutes each – you’ll need a paring knife to get the green shells off of the nuts. Either way, you get this:  The raw stone.

Put all of the stones into a pot with some water and stir until the rough exterior of the stones pulls the excess fruit off of them.  Drain and dry the nuts for several weeks, preferably in a location that the squirrels won’t get at them.

Then, you’ll need to get on to the cracking.  I do mine with an arbor press.  I’ve seen folks do them with a hammer on concrete, a vise, rolling cars over them, etc.  Me, I’m a fan of doing things in the easiest way possible, so arbor press it is.  They are an order of magnitude harder to crack and pick than an English walnut, so be prepared to work at it!

1 Response to How to process black walnuts