Last year, we did a whole bunch of plant starts.  I planted, with the kids a LOT of plants.  We put them on the radiator and had so-so results, with the light source being the window.  This year, we’ve gotten a large 4 foot long shelving unit and hung lights on it.  We’ve still got the boot trays

for moisture overflow that we purchased last year, and now, they’re illuminated!

They have a T8, $13 florescent shop light from Lowes hanging from each shelf. The lights each have a warm bulb and a cool bulb in them.  We’ll see how they grow plants!

Last weekend, we tried to get the starts going…unfortunately,  we’d put the potting soil out in the barn last fall and the darn stuff FROZE!!!  So, with the rock hard block of dirt in the house to defrost, we let it defrost and are waiting for next weekend to start the plants.

Beyond that, we’re working on a couple of big household upgrades; insulation!  Efficency Vermont should be arriving within the next couple of months to insulate this very old, leaky house, and give us cheaper options for a more efficient furnace and water heater.  We’re also talking about taking some money and slowly investing it into renewable energy sources – like pump to run the furnace.  I truly fear being without heat here in the event of a power outage.  Options – I want options.

Beans.  I also like beans.  Beyond eating, beans are good for sprouting. And they’re dirt cheap.  Typically they come in plastic bags which are awkward to store.  So, I’m trying something that seems as if it should work; canning dry beans.  Yep, my love of the jar is coming back!

I took dry beans and dropped them into a regular canning jar, put the lid on the jar, and put it into the oven at ~175 overnight.  When I took the jars out in the morning, I sealed them o a bit tighter and got some “hiss” out of the jars.  I left for work for the day and  let them cool. 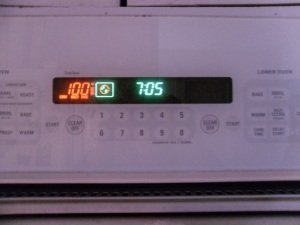 My husband, he of the plastic armor, said he saw some moisture on the inside of the jars during the cool down period.  We’re marking them as “test” and will see if next time, we need to leave the lid off while in the oven.

Update – that was yesterday.  On the way home from work, I stopped at our favorite salvage grocery and bought yet more…beans!  Tonight, they’re in the oven with some barley drying out without tops on.  I’ll put the lids on later on tonight.  This *should*let the jars a) dry out any moisture on the inside and b) heat up the grain/beans enough to make a good seal.