We had a lovely thanksgiving.  We went to my sister’s house in Albany &, because we’re big & she’s got a small house, stayed in a hotel.  It was a nice time.  By the time we got home, however, I was sure the congestion was not an allergy attack, but a cold.  Yuck.  I am not a fan of my nose when it’s sick.  Even much less a fan of my throat when it hurts.  So, because we hit the large asian grocery in Albany yesterday and picked up all sorts of neat foods I can’t wait to try (black and brown rices as well as Thai Sticky Brown rice!), we’ve got a lot to put away.  We also got some inexpensive veg & fruit.

And, because I’m sick and we bought a large amount of tea at the asian grocery, I went out and bought a shiny new kettle (we had given up our last because we weren’t using it). 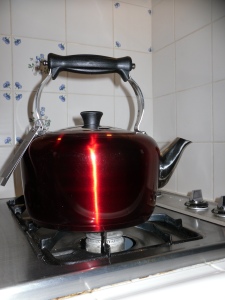 During Thanksgiving, my mom offloaded her older seeds and her cookie cutters to us.  Some of those seeds are nearly as old as I am.  My husband took the mung bean seeds and is trying to make sprouts with them – those venerable seeds were circa 1976.  In the immortal words of my mother “They pulled seeds out of the pyramids that are still good…these will be fine.”  So, I give you 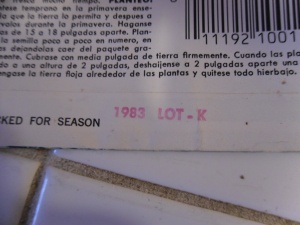 And onto the subject of today’s post.  It’s a bit rambly.  I’m canning some experimental mustard.  I tried this earlier in the year, but ended up with a edible but bitter product (I was very glad I only tried a little!).   So, back to the kitchen I go.  I’m using the recipie from the Mustard making guru/queen, at Local Kitchen.  http://localkitchenblog.com/2009/01/28/cranberry-habanero-mustard/ 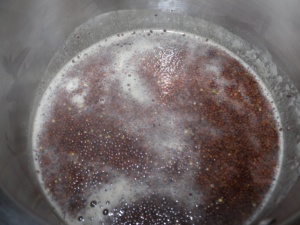 It looks so good…if only it comes out as nice as it looks!

I’m also making condiments.  We’re doing, because of yesterday’s shopping trip and leftover turkey, random things that really don’t go together.  So they’ll be fabulous.  Guacomole and cranberry relish.  The guac is my own recipe, pulled together from lots of experimenting, and the relish comes from my aunt Mary, who, I’m certain got it from someone who got it out of a recipe book, but I do not have the originator or I’d give them credit.  It’s addicting.  I can eat this on EVERYTHING.  Eggs, turkey, sandwiches, bread, ice cream, you name it.  It’s just that good.

So, without further ado, here are the recipes.

I chop the ginger and apples together, the apples help the ginger, which is really sticky, to stay on the blade.

Then, when the ginger is tiny, I add the orange & cranberries and chop.  I keep the cran kinda on the large side, because I think it’s prettier that way, but you can chop it to bits if you like it that way better. 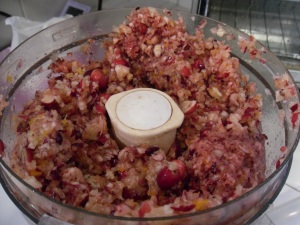 Grind everything to the avacodos up in a food processor.

Then, peel and de-seed the avacados – put those and the tomato, quartered into the food processor.  Pulse until you’ve the consistancy you’d like, adding the citrus juice for a little lubrication.  Salt & pepper at the end to taste. 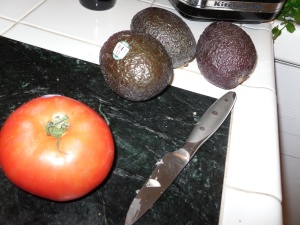