Starting at the end.  My mother-in-law has just purchased a house up the street from us.  It’s about 3 houses up.  Again, an older farm house, it even still has a pump in the back yard, which the now grown children of that family recall actually working when they were small.  (My guess is that it still works, but needs a new washer to create the seal/seat.)  Anyway, while we were walking the property doing post sale inspections for her – she’s still in California, having trusted us to do the purchase parts – I saw lots of mature plantings and did a double take.  “Rhubarb?  Hurh?  I’ve been paying for it at the farmers market and here it is!!!”  Lots of rhubarb.  Obviously a 20+ year old planting, that had been let to seed in the last  few years and that had been re-growing itself.  The previous owners took some, so I did too!!!  I’ve now my own larger (small) rhubarb plant, and I took 2 heads of seed to replant in my own garden – hey, it was there and only reseeding one small area again, why not, right?

She’s also got a beautiful blackberry/raspberry bramble on the side of the house, yarrow and chives, all growing along the back.  (I’m going to steal a chive planting too when our herb garden gets going!)  In the mean while, I made Marissa’s, from www.foodinjars.com , chive vinegar.  It’s gloriously colored!  Beautiful shades of pinky-purple.  I’ll post pics later.

My dad is in here with us, working on our house for us this week.  It’s good to have a carpenter dad – (Thanks daddy, we LOVE it when you come to visit!)  Because he’s kinda a steak & potato guy, we’d been anticipating having a fair amount of potatoes this week, and didn’t eat up all of our winter stock…uh-oh.

When my husband went to the basement to pick up the 25lb bag of potatoes he’d purchased, they’d all grown eyes and looked for the world like little spaceships, attempting to grow towards the light, thru the mesh in the bag…it was one of the more spectacular growths of potato eyes I’ve ever seen!!!  It could NOT be carried upright, had to go up on it’s side, so great were the eye growths!

What on earth do you do with 25 lbs of grown out, wrinkled up, potato eyes?!?!   Well, we dropped them into bowls of water for a few days to rehydrate them and then decided to have week (or two!) of the potato.  The first dish was your standard mash.  The second dish was a baked potato with herbed butter.

1 clove of garlic, minced and fried gently, just until the edges crisp

2 pinches Gerra spice (now, this is a new spice to me, so if you don’t have it, fake it!  ¼ tsp of cinnamon and a couple of pinches of paprika would make a nice fake out.)

The 3rd dish was more baked potatoes, or as my husband made them, po-turd-os, lol!   They looked for all the world like tin foil wrapped things that should never be served at the dinner table, yet were!

The garden is growing well. We now have some peas and beans, and have been eating the salad garden bowels for several weeks, as well as the salad greens that are growing in the garden. 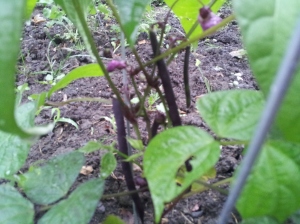 The corn I put in will mostly be knee high by the fourth of July.  The  horseradish has surprised me.  From the bit that got dug up by the squirrels, to the one I planted and lost, it’s all come up!  I’ve been pleasantly surprised by it.

The asparagus has come and gone, and given us just a taste, but I didn’t expect to get a full harvest this first year.  I believe I’ll have to put in more, to replace the dead loss, next year.

Mom, canner, reader, sci-fi geek, she who loves car seats
View all posts by catfeet1 →
This entry was posted in Uncategorized. Bookmark the permalink.